Sparky the Fire Dog was sworn into the City of Jerome Fire Department at a City Council meeting on February 7, 2012. Sparky the Fire Dog®, the official mascot of Nation Fire Protection Agency (NFPA), observed his 60th birthday in March 2011, but we celebrated all year long!

Sparky, created in 1951 for an Advertising Council campaign, has always been an influential figure in fire prevention, and his success can be attributed to collaboration with firefighters and others to educate the public on important prevention and safety messages. In addition to connecting with the public through public service announcements, Sparky has a featured role in NFPA's Fire Prevention Week campaign each October. 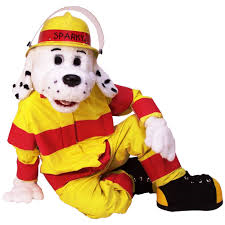